For as long as computing has existed, there has always been a great distance between “traditional” programmers and driver programmers, since both worlds were very different.

On the one hand, this was due to the low power of the controllers, which required programming languages very close to the machine, usually similar to the C language , difficult to learn, and different between different brands.

On the other hand, software companies do not approach this world because it was a great effort for them to learn these new languages. On the other hand , they couldn’t interact directly between their software and these programmable controllers, everything became excessively complicated.

But what if you suddenly find a programmable controller that is programmed in the same language you already know and that can be integrated into your APIs in a direct and natural way. With this you could make your applications take a new direction that you had not thought of until now, now your applications could interact with reality in real time.

If this were possible, the separation between programmable automatons and traditional programming would disappear and whatever you think you could turn into reality. Do you want to play Tetris with the lights of a building? Do you want to make figures with water from a fountain? You can do it and working naturally in JavaScript.

That you want to change the tone of the lighting depending on the % of CO2 in the environment… well, you can also do it in your favorite language.

Adquio allows you all this, and not only that, but it also allows you to connect to any API of your web or internet APPs, and use the data obtained to carry out operations on the programmable controller . Imagine the fields that this opens up for you, now when a company asks you… “Do you know any programmable controller programmer?” Instead of answering -no-, your answer will be, -Yes, we can do it ourselves, but it must be with Adquio.

History changes, technologies converge, and whenever this happens new business opportunities appear that did not exist before, now the limit is in your imagination and in finding how to take advantage of them.

Programming at Adquio: Connecting with APIs 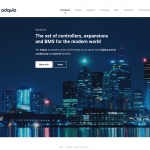 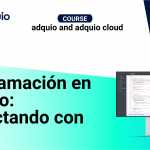 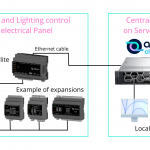